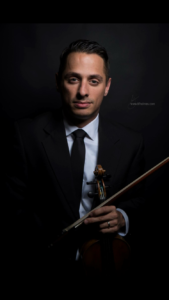 Dr. Timothy Angel is a dedicated performing artist and teacher. Originally from Washington State, he now resides in the Arlington, Texas where he is an adjunct violin professor at the University of Texas at Arlington.

Most recently, Dr. Angel was invited to act as a guest concertmaster for the Amarillo Symphony and won the Principal Second violin chair in the Lubbock Symphony. In the past, Angel has also won section violin positions with the Las Colinas Symphony and the Lubbock Symphony Orchestra. He has also won numerous competitions including the Coeur d’Alene Symphony Orchestra National Young Artist competition in January 2015, where he performed the Glazunov Violin Concerto in a minor with the symphony the following May. Angel’s other solo engagements include works by Sarasate, Camille Saint-Saëns, and Jean Sibelius.

In the spring of 2018, Angel completed his Doctorate of Musical Arts in violin performance at Texas Tech University. There he held a prestigious position in the Graduate String Quartet, was awarded concertmaster in the University Symphony Orchestra, and was a Graduate Teaching Assistant for his instructor, Dr. John Gilbert. Additionally, during his time in Lubbock, Dr. Angel also directed the Suzuki Violin Program at Ramirez Elementary School and worked with the Suzuki Talent Education of the Lubbock Region program.

Each summer, he continues his studies by attending training institutes and music festivals including the Brevard Music Center, Meadowmount School of Music, Suzuki Teacher Development Training, Bravo Strings institute, and the Symphony Orchestra Academy of the Pacific.

Dr. Angel has won many awards including the American Suzuki Institute’s John and Catherine Kendall Memorial Scholarship for 2016, the CodaBow International Scholarship for 2017, and the Most Outstanding Graduate Student at University of Texas at Arlington for the 2014-2015 school year.